Join me as we make a two-toned card with hydrangeas, crinkle flowers, and a garnish of handmade leaves!

This week’s card was inspired by one we found on Split Coast Stampers (http://www.splitcoaststampers.com/gallery/photo/2485502?&cat=24357). I don’t have a leaf-shaped punch that would look right with the card I made, so I decided to keep that idea but make my own leaves. You can always use a leafy punch you have on hand, though, if you prefer.

Make three medallions to go on the card base. For the two smaller ones, I used the exact recipe of inks from the package insert, except for sage ink, which I used to edge the medallions. For the larger medallion, I used green tea ink, grape ink, hyacinth inks (not listed on the insert). I wanted the centerpiece to be mostly purple to match the hues on the card base. I also used green and purple Gelly Roll  pens around the medallions as well as a little gold-paint-pen trim. The center medallion is popped up with double-sided foam tape.

The last step for this card was sort of accidental. One day while trimming a thin strip from a round piece of paper, I noticed that the paper curled all by itself. So I incorporated this discovery when making the leaves for this card. I simply drew a circle on green paper and started trimming around the circle, cutting little bump-shapes as I cut. At the end of the strip of paper, I opened up the shape to form leaves. Then I just used the green colored pencils to draw the veins and did a little shading. Not hard. At all. And fun! Garnish your card with some clever bits of greenery and you’re done!

I hope you’ve enjoyed this graphically pleasing card (I don’t take credit for the design). It’s such fun to see a delightful card online and to put your own spin on it, making it unique in its own way. The component stamping method makes that endeavor more challenging and more rewarding, I think. I also love the fact that I can make a card that’s reminiscent of wildflowers and, with the same exact stamps and a little change of placement and regularity, I can make a stamp a formal garden! 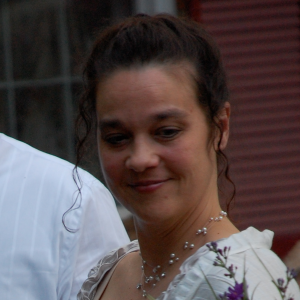